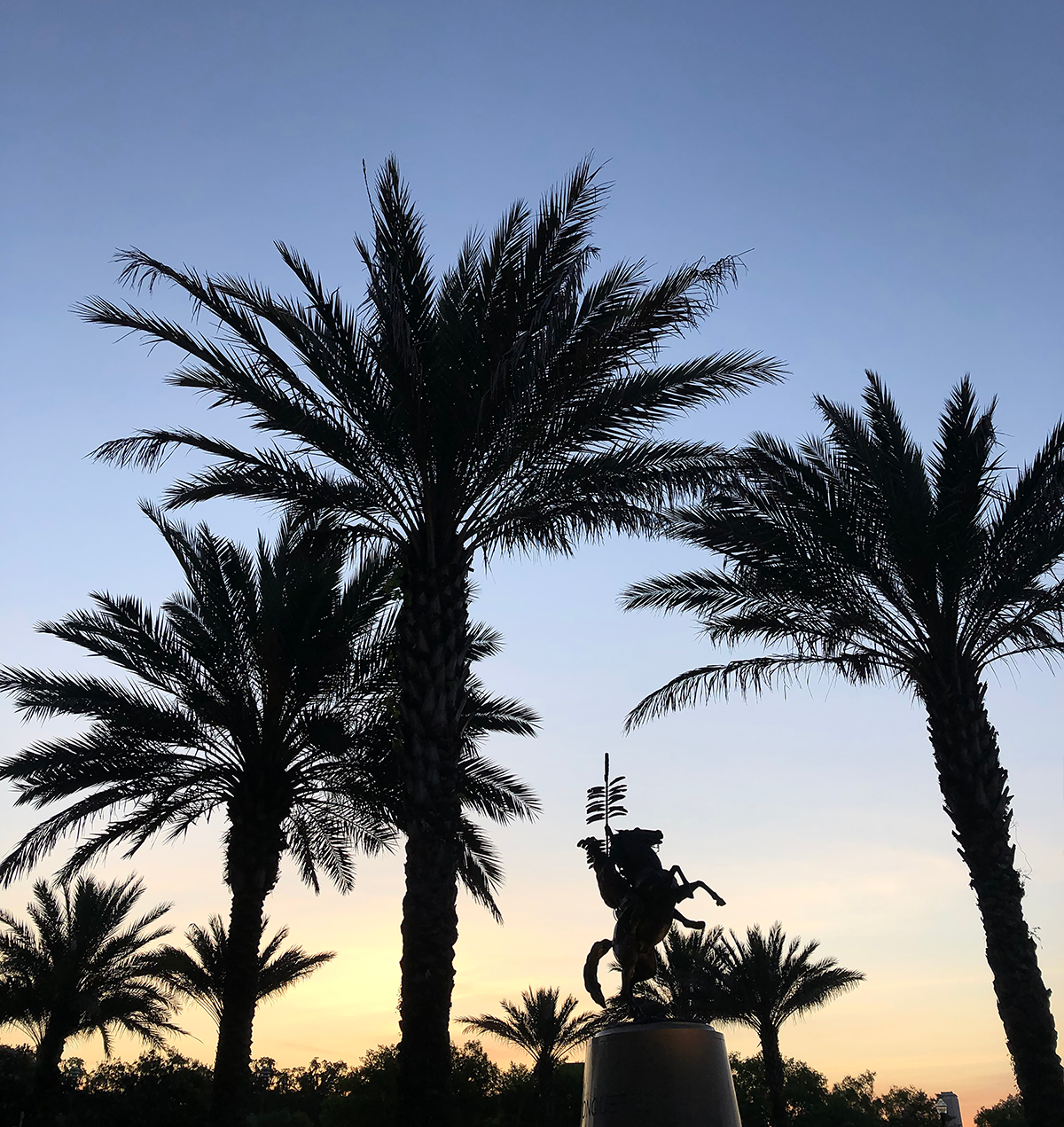 The sun rises over the “Unconquered” statue on Langford Green outside Doak Campbell Stadium. The bronze sculpture, completed in 2003 by Fritz White, reaches three stories in height and celebrates the indomitable human spirit. The decade-long campaign to bring the project to life was spearheaded by FSU alumnus Stephen Reilly. Photo by FSU English alumna Stephanie Vivirito. Photo editing by Tom Morgan.

While we’re often encouraged to look at the big picture, Elise Chávez thinks small. Chávez, a Florida State Department of Physics alumna, is a particle physicist, working at the nano level to examine and experiment with subatomic particles — electrons, protons, neutrons — the smallest building blocks of the universe.

Training for a marathon is already a brutal, months long endeavor, but for John Wilcox, logging 40 to 60 miles per week in his preparation for the 2021 Boston Marathon posed an additional challenge.

Being a leader is nothing new for Tracy Norris. In her long military career, the Army Major General has served in combat zones and worked her way through the ranks, earning increasing positions of responsibility.

Saying Angel Purganan has a broad range of interests is a bit of an understatement. When the Tampa, Fla., native graduated from Florida State University this spring, it was with dual degrees in philosophy and political science and minors in Middle Eastern studies and history.

The past has always been part of Sarah Patterson’s future. “I think there are several motivations that drive me to focus on history,” said the two-time Florida State history alumna. “In part, I’m very curious. Doing historical research allows me to ask questions and then go look for answers. It’s an unending process of learning.”

When Caitlyn Edwards checked her email in July and learned she received a prestigious award, her first thought was to call her sister, Ashley. But, she wasn’t so much hoping her sister would offer congratulations, as she was eager for Ashley to check her own email.

Language is a fundamental part of the human experience. It’s what separates humans from other animals. But since the 1950s, computer scientists have been trying to make computers capable of understanding language as well.

Actress and philanthropist Audrey Hepburn made famous the quote, “As you grow older, you will discover that you have two hands. One for helping yourself, the other for helping others.” When it comes to Florida State University biology major Alexis Cox, her extensive list of volunteer work suggests she has about a dozen extra hands at the ready.

For the past decade, digital data has experienced exponential growth as technology has changed how information is created, captured and consumed. The amount can easily double from year to year, and Statista projects 181 zetabytes — that’s 181 billion terabytes — will be produced in 2025.

Like superheroes, most meteorologists have an origin story. A lifelong passion for weather often starts with a single moment when Mother Nature’s fury leaps off the television screen and into real life.

For Department of Classics alumna Cheyenne Tempest, conducting research abroad seemed like an impossible dream. Thanks to gifts from generous Florida State University College of Arts and Sciences donors, Tempest has excavated at archaeological sites in Italy as well as designed and mounted museum-level exhibitions in one of the world’s most culturally rich cities.

In the heart of London in 1971, the Beatles were just embarking on their new solo careers, bell-bottom jeans were all the rage, and the United Kingdom was still adjusting to the introduction of decimal currency. That year, Florida State University welcomed its first students to its new study abroad program in London.