West of St. Petersburg in the Gulf of Mexico is an area called the West Florida Shelf. It’s a marine desert, cut off from many of the elements that are essential for life.

But in this nutrient-deficient region, some forms of phytoplankton — microscopic plants that float through the water — are thriving and supporting other forms of life. But how?

Florida State University Associate Professor Angie Knapp and a team of researchers from around the country have received a $2.3 million grant from the National Science Foundation to investigate this oceanographic mystery. Knapp, part of the Department of Earth, Ocean and Atmospheric Science in the College of Arts and Sciences, will lead the project to examine how iron and nitrogen released from submarine groundwater discharge potentially serves as a fertilizer for phytoplankton in this area and beyond.

Submarine groundwater discharge is a ubiquitous hydrological process characterized by the flow of fresh and brackish groundwater from land into the sea. It plays an important role in moving nutrients, trace elements and gases that are often used by phytoplankton throughout ocean waters.

In this project, researchers want to understand exactly how far these elements are moved through the sea and to what degree they are being used by phytoplankton.

Researchers will use a diverse array of chemical analysis techniques to extract information from water samples collected at various depths on the West Florida Shelf and other areas of the Gulf of Mexico. Through this, they hope to identify the isotopic composition of dissolved iron and nitrogen, which is known as a geochemical signature. Further analyses will focus on characterizing the nutrients consumed by phytoplankton and the significance of the nutrients in the greater environment.

Ultimately, the different geochemical signatures will be compared to determine which sources are consistent across all the samples. Examining the distribution of particular isotopes in the samples allows scientists to track the distance submarine groundwater nutrients travel into the Gulf of Mexico and Atlantic Ocean. The team will also investigate the role of boundary fluxes, the transfer of any elements from land or the atmosphere to the ocean, and how those transfers affect phytoplankton.

The West Florida Shelf is generally insulated from deep-ocean influences of nutrient-rich water, meaning it is nutrient depleted, or oligotrophic. While nitrogen and phosphorous — found in proteins, enzymes and DNA — are essential elements for all forms of life, the oligotrophic areas of the West Florida Shelf contain relatively low concentrations of these elements.

Without iron and phosphorous, phytoplankton growth is limited, posing a significant challenge to ocean life, as the microscopic plants form the base of the marine food web. The effects of limited phytoplankton growth cascade through the ecosystem and affect the abundance and diversity of fish, sharks, whales, and more.

Yet on the West Florida Shelf, some forms of phytoplankton are flourishing, meaning they must be receiving nutrients from somewhere.

“An over-arching theme of my lab is identifying and quantifying nutrient sources fueling phytoplankton growth in oligotrophic ocean areas, which are referred to as ocean deserts,” Knapp said. “Interestingly, some phytoplankton still thrive in these ocean deserts, like the West Florida Shelf, and my goal is to understand the source of their nutrients. Research in my lab indicates organic nutrient sources are important in regions where inorganic nutrient sources are scarce, and we expect organic nitrogen and phosphorus and iron coming from submarine groundwater discharge are playing an important role supporting phytoplankton on the West Florida Shelf.”

Knapp’s work also serves an important role in educating the scientists of tomorrow, said EOAS Chair and Professor of Meteorology Bob Hart. In addition to the undergraduate and graduate students who will assist Knapp in the lab, the grant funds outreach activities for K-12 students.

“Educational activities for K-12 students will be developed to increase awareness of the roles that nutrient fluxes and marine algal growth play in regulating global climate,” Hart said.

Also contributing to this project will be researchers from a number of other institutions including Kristen Buck and Tim Conway from the University of South Florida College of Marine Science; Phoebe Dreux Chappell and Joseph Tamborski from the Old Dominion University Department of Ocean and Earth Sciences; Rene Boiteau from the Oregon State University College of Earth, Ocean and Atmospheric Sciences; and Chris Smith from the United States Geological Survey St. Petersburg Coastal and Marine Science CenterGiven the importance that phytoplankton play in the food web, the project’s findings will be crucial for future work in understanding marine processes in the Gulf of Mexico, researchers said.

“Plankton play a central role in the marine food web, the global carbon and nutrient cycles, and our climate,” said EOAS Associate Chair and Professor of Oceanography and Environmental Science Markus Huettel. “This collaborative project will produce findings that are not only critical for understanding the processes that control algal growth and carbon sequestration in the Gulf, but also advance oceanographic research and education in the EOAS department and beyond.” 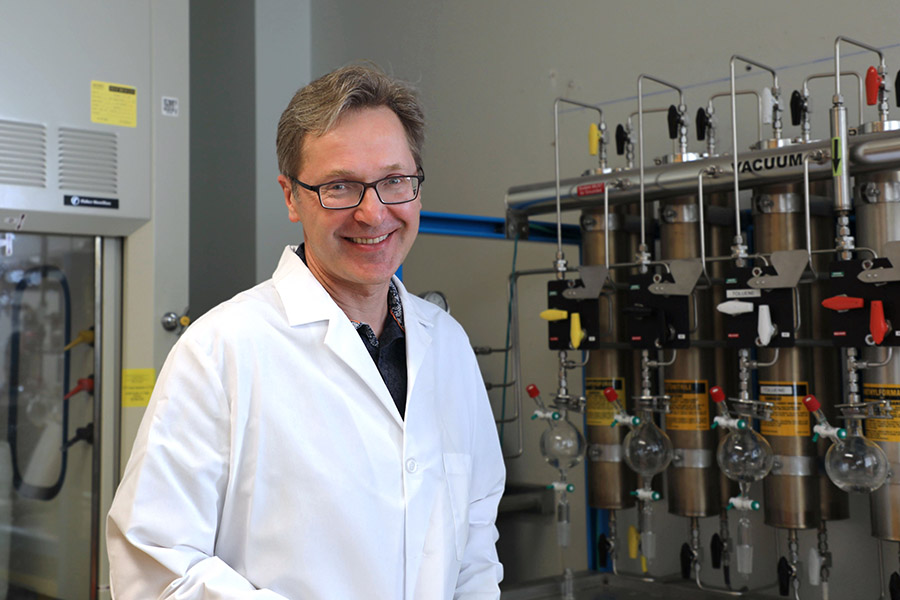